The first quarter of 2022 was not short on drama, with sharp losses and heightened volatility across the board for investors amid tightening monetary policy, war in Europe and soaring commodity prices.

The Morningstar US Core Bond Index lost 6% for the quarter, the worst ever quarterly loss in the index’s performance history since its year-end 1999 inception. Within the index, exposures to long-dated US Treasuries and corporate bonds, which comprise 16% of its market value, generated the greatest losses, at -10.5% and -11.5%, respectively, for each segment. Soaring yields on the US 10-year Treasury note, which climbed more than 75 basis points from 1.48% to 2.24% over the course of the quarter, were one of the key drivers of negative performance for the period (bond yields and prices move in opposite directions). 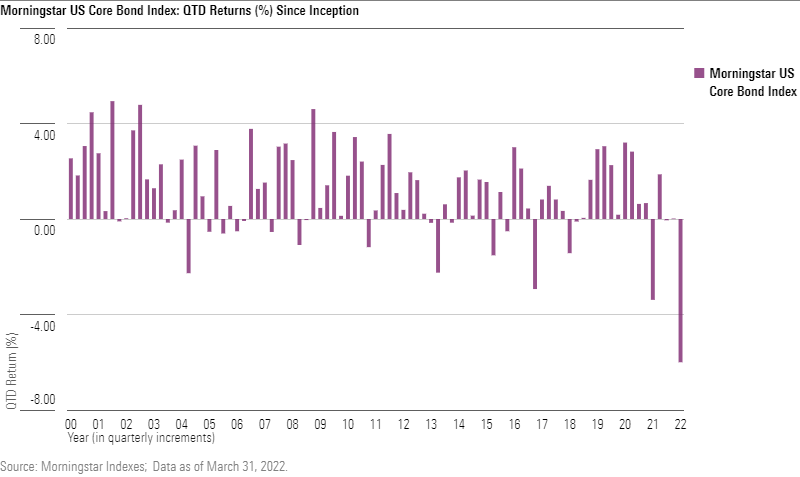 Indexes are not available for direct investment. Past performance does not guarantee future results.

Adding fuel to the bond fire was inversion of parts of the yield curve as yields on 3-5 year Treasuries crept up to 10-year levels, added Binns. As it shifted upward over the quarter, it also began to invert in some places by the end of February.

Throughout March, the upward shift of the yield curve continued while short term yield- steepening accelerated as a result of investor expectations of the Fed increasing the size and frequency of rate hikes to quell inflation while also running the risk of cooling the economy. In the final days of March, the yield on the US 5-year Treasury exceeded that of the US 30-year Treasury, at 2.64% and 2.56% (as of March 25th), respectively, and has remained in the inverted position since, raising the alarm bell of a possible recession. 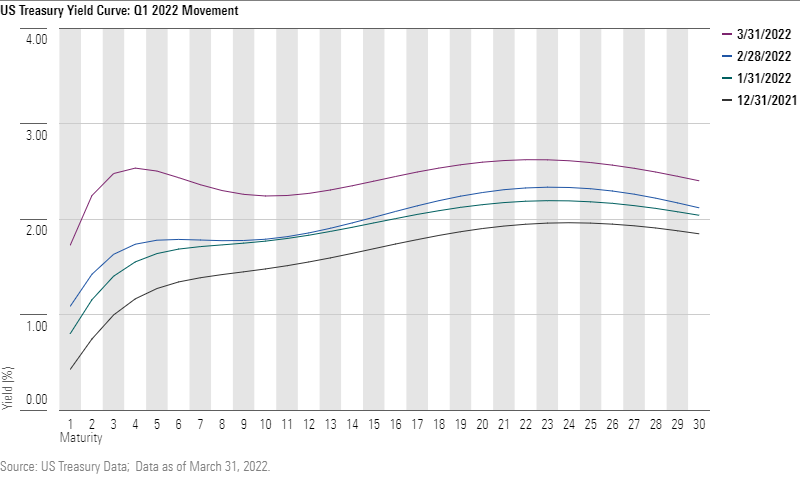 Equities also had a challenging quarter, according to Morningstar Indexes Strategist Dan Lefkovitz. The Morningstar US Market Index, a broad gauge of equities, was down more than 12% from the start of the year through mid-March, driven largely by declines in communications services, consumer cyclical and technology areas before making up some of those losses to close the quarter down 5.3%. It was a highly volatile quarter that saw some daily swings of 3% in the market’s value.

The equity market also saw a major rotation within investment styles, as Growth stocks, which have led the market for many years, suffered the brunt of the first quarter’s pain, while the Value side of the market was actually in positive territory. This resurgence for Value cuts against the grain for the past 3 years, in which the Morningstar Broad Growth Index has returned 22% annual as compared to a 14.8% average annual gain for the Morningstar Broad Value Index. The combination of elevated share prices coming into 2022 and rising interest rates leveled a one-two punch to Growth sectors like Technology.

Meanwhile, Natural Resources were the first quarter’s big winner, as the war in Ukraine only exacerbated supply demand imbalances that have been pushing inflation to 40-year highs. The Morningstar Global Upstream Natural Resources Index, which highlights the shares of companies that have significant business operations in the ownership, management and product of natural resources in energy, precious metals, timber and water resource most sensitive to prices of these commodities, gained 20.1% in the first quarter.

If you would like to speak with Katie or Dan, please reach out to Tim Benedict at (203) 339-1912 or tim.benedict@morningstar.com.

©2022 Morningstar. All Rights Reserved. The information, data, analyses and opinions contained herein (1) include the proprietary information of Morningstar, (2) may not be copied or redistributed, (3) do not constitute investment advice offered by Morningstar, (4) are provided solely for informational purposes and therefore are not an offer to buy or sell a security, and (5) are not warranted to be correct, complete or accurate. Morningstar has not given its consent to be deemed an "expert" under the federal Securities Act of 1933. Except as otherwise required by law, Morningstar is not responsible for any trading decisions, damages or other losses resulting from, or related to, this information, data, analyses or opinions or their use. References to specific securities or other investment options should not be considered an offer (as defined by the Securities and Exchange Act) to purchase or sell that specific investment. Past performance does not guarantee future results. Before making any investment decision, consider if the investment is suitable for you by referencing your own financial position, investment objectives, and risk profile. Always consult with your financial advisor before investing.